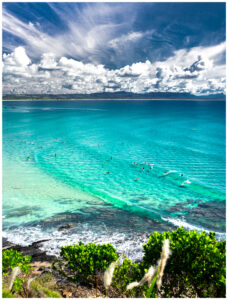 Byron Bay is the most easterly point of mainland Australia and is situated on the far north coast of NSW. It was formerly named Cavanbah (meeting place) by the Indigenous Australians who lived off the land for over 20,000 years and were known as the Arakwal People. The town was re named Byron Bay in 1894 when the railway line was introduced and the town's infrastructure began to develop including the opening of the Lighthouse in 1901. In more recent years it has been known for its laid back surfing lifestyle due to its pristine beaches, with the most common including Belongil, Wategos and Tallow beach.

While driving through town you can experience glimpses of the ocean accompanied by the atmosphere created by local musicians and street artists. The best way to explore the stunning coast is by foot or bicycle. Take in the views of Cape Byron via the paved coastal walk which begins at The Pass then leads to Wategos beach and continues up a steep incline to the Lighthouse. The 360 degree view showcases the spectacular landscape and vast beauty of the Byron shire including Brunswick Heads, Mullumbimby, Bangalow and Suffolk Park.

Looking out to sea you can witness pods of dolphins as they swim by Julian Rocks Marine Reserve which is just 2.5 km off shore. This reserve is home to a diverse eco system including sting rays, turtles, dolphins, sharks and an endless array of fish. With over 1000 different marine species it is one of Australia's top diving sites. 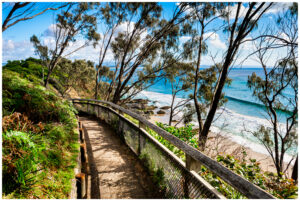 Coastal walk from The Pass to Wategos.

Longboard riders have been surfing here since the early 60's notably at The Pass, Wategos and Cozy Corner. These world famous beaches continue to draw crowds from all over the world.

In 2021 the population of Byron reached 10,000 and has fast become one of Australia's prime real estate locations. The locals are well known for embodying a deep passion for sustainable and resourceful living. This emanates in all aspects of their life including food, a legacy that has been passed on for generations and means there are plenty of options when finding a meal. A few great options include: Bayleaf café offering a fresh and colorful menu, the Cardamom Pod which serves up wholesome vegetarian dishes and Folk serving organic plant based food along with great coffee.
Also in the heart of town along Jonson street is the Great Northern Hotel, an iconic landmark which hosts live music all year round. A great addition was added in 2017 with the opening of the Byron solar train which takes you through nearby rainforest, surrounding wetlands and into the arts precinct. The 92 seater vintage train underwent a make over and is now the worlds first solar train with plenty of extra room for bicycles and surfboards. 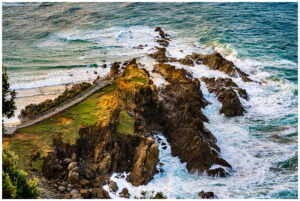 The region's mild climate and sunny hill sides are perfectly suited for farming. Early settlers started out using the surrounding land to grow sugar cane up until the government outlawed the use of Pacific Island labor. Shortly after the land was used to grow bananas instead.
While driving through out the region you can see large farms of coffee trees, bananas and macadamia nuts. The macadamia is native to the neighboring state of Queensland and has long been a prized staple in the Australian indigenous diet for thousands of years.
Just south of Byron along Hinterland Way is the Macadamia Castle which has been the regions most popular tourist destination since 1975. It is an animal park with a wide variety of native wildlife and a huge selection of local macadamia nuts and treats.
A stones throw away you can experience the green rolling hills of Tintenbar. This is also home to Killen Falls waterfall located in the subtropical rainforest and is the perfect place to cool off during summer.

Heading back to the coast? Take the scenic drive to Broken Head Nature Reserve along Midgen Flat Road, which winds through the country side of Coopers Shoot and connects up with the Reserve showcasing ocean front views.

Broken Head is situated at the southern end of Tallows Beach and is generally considered a less crowded option. A main attraction is the Three Sisters coastal walk, the 1.6km return walk winds its way alongside Pandanus trees and Bangalow Palms which leads to the grassy headland offering panoramic views of the South Pacific Ocean.

The three rocks were given their name by Aboriginal folklore, a story involving three sisters that drowned in a rip and were turned into stone.
The nature reserve is packed with wildlife including the white bellied sea eagle, wallabies and snakes so be sure to keep an eye out.

When visiting Broken Head consider a bite to eat at the nearby Suffolk Park Bakery which has been dishing up fresh pastries since the mid 80's.
From here Broken Head continues south along 7 Mile Beach and leads into Lennox Head.
In 1935 the mineral rich sand throughout the region was noted to be high in Zircon and Rutile. Miners began extracting these minerals along 7 mile beach where they lived in tents. The minerals were highly sought after by the ceramic and titanium alloy industries and was a major export that was successful up until the 1970's.

Summary: There is plenty to see and do in the Byron Shire as the weather is pleasant all year round with the coldest months between June-September.
Take a surfing lesson at Wategos beach, walk amongst native wildlife along coastal tracks and indulge in locally grown food at cafes. It really is a must visit for all ages.

Getting there: From Ballina airport follow Tamarind Drive and take the M1 Pacific Motorway heading north, turning off at Ewingsdale Road. Total distance 36km.
Along the way consider the scenic drive through Bangalow and Possum creek followed by a panoramic view over Byron Bay from St Helena lookout. 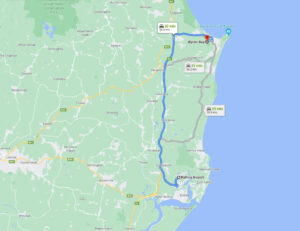 ← Sapphire Coast NSW – Plan your next holiday
Scroll To Top