Wilsons Promontory National park is situated 250km south east from Melbourne in the rural Victorian region of Gippsland. It is the southern most tip of mainland Australia offering white sandy beaches, mountains and estuaries.
The entrance to the Prom begins at the northern section of the park. The terrain is flat and open bushland, perfectly suited for kangaroos, emus and the infamous promontory local, the wombat. Kangaroos can be seen in large groups grazing by the side of the road. 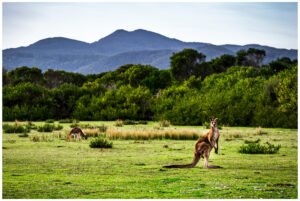 Close by is the Big Drift. A remote and expansive sand dune that stretches for kilometers, the dunes landscape is always changing as its shaped by the wind.
Continuing on the road starts to bend as it nears the ocean, offering the first glimpse of the coast. Granite boulders dominate the landscape and can be seen lining the turquoise coastline and nearby islands.
The only settlement is Tidal River which acts as a base within the park. There are camp grounds, cabins, hot showers and laundry facilities. Along with an information centre and a general store that sells non perishable items, produce and a small selection of hot food. 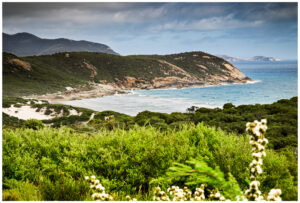 There are plenty of picnic tables in this area tucked away in private alcoves that protect from the southerly wind, Its a great environment to experience the native wildlife up close including birds, wallabies and kangaroos.
Wildlife isn't the only thing The Prom attracts in abundance, bush walkers from all over the world come to experience the untouched beauty, which stretches over 130kms.

The park is 48,000 hectares in size and is the largest coastal wilderness area in Victoria, that being said there are plenty of hiking trails which cover different regions of the park and can be split up into over night hikes.
These include Sealers Cove, Refuge Cove, Little Waterloo Bay and the Lightstation to name a few.
There are also endless short walks and day walks to enjoy such as Pillar Point and Little Oberon Bay along with the 3 most prominent beaches Whisky bay, Picnic bay and Squeaky beach.
Squeaky beach has fittingly earned its name by the fine quartz sand that squeaks when walked on. Once you have squeaked your way to the shoreline experience the grandeur of enormous boulders covered in a distinctive orange color. These colors are caused by Lichens which are a combination of algae and fungus that live together symbiotically. 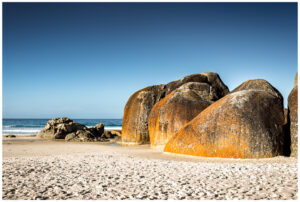 This cluster of beaches can be accessed via a coastal walk or their own carparks. Due to the peninsula's westerly aspect it offers the rare opportunity to see the sun set over the ocean from the east coast of Australia.
Close by Norman beach is a great way to get acquainted with the natural surroundings, only a stones throw from Tidal River. White sand and shallow pools form around granite rocks showcasing the quintessential promontory landscape.
Norman beach offers expansive spaces to ride bikes, play beach cricket, throw the frisbee among other activities.
This prime real estate however doesn't come cheap at $60 per night for a non powered camp site during summer months. Due to the popularity of the park the 480 camp sites are allocated via a ballot system during peak season. 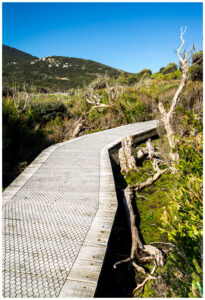 Upon driving into the park Mt Oberon can be seen standing 558m high, The summit offers incredible 360 degree views over the park.
The Mount Oberon hike starts at Telegraph Saddle carpark and is a moderate incline for 3.4km along a fire trail.
During the hike its common to encounter wallabies, especially at dawn and dusk. Near reaching the top there is a short rock scramble to the summit.
It is considered one of the best vantage points in the park offering views out to nearby islands and Norman Point.
Telegraph Saddle has a small carpark which in summer is closed, instead a free shuttle bus runs there from Tidal River which helps minimize congestion during summer. 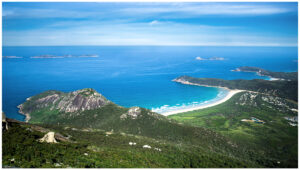 The Lightstation is a popular attraction with a small number of cottages to stay the night in comfort. The walk however, is 20km each way.
This is part of the Southern Circuit which is a 41.5km hike winding its way through the lush rainforest canopy. The walk is known for its diversity of flora, experience hiking along side coastal Banksia plants and the most remote and expansive beaches in the park. It is recommended to allow 3 days to complete the Southern Circuit. 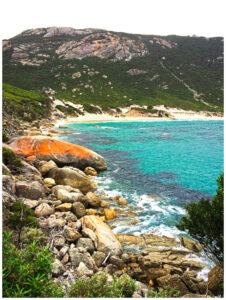 A new edition to the park is an ecotour boat cruise which is a great way to explore the Prom. Visit remote islands such as Skull Rock, Kanowna Island and other hidden gems along the coastline for over 2.5 hrs. The cruise will get you up close to nesting sea eagles and whales during migrating season. Kanowna Island is home to the worlds third largest seal colony.
These pristine waters are home to an array of colorful invertebrate life such as soft corals, yellow zoanthids and different variety's of sea stars among other marine life such as crab, crayfish and the blue ringed octopus.
The endless selection of fish was a staple for Indigenous Australians who lived off the land for at least 10,000 years.

Summary: The Wilsons Prom is a unique wilderness getaway offering activities for all ages and fitness levels. Experience the untouched beauty of remote beaches and wildlife while staying in comfort at Tidal River.

Getting there: From Melbourne follow the Monash Freeway until reaching Trafalgar then turn off onto the C469 and follow the signs heading toward Fish Creek and Yanakie which are the last towns before reaching the Wilsons Promontory. 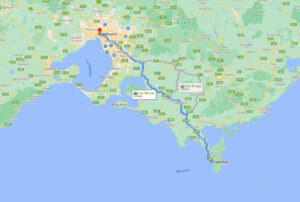 Thanks for reading, if you found this blog useful please consider sharing on social media.
@fergusgreenimagery